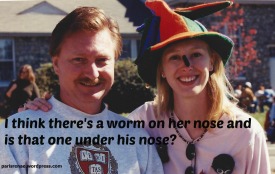 Have you heard? In a little town in North Carolina there’s a round of races about to happen. It isn’t runners, it isn’t cyclists, it isn’t cars…It’s Wooly Worms! Back in the 1940s a scientist exploring the area started studying these furry guys. He noticed over the seasons that sometimes they had more orangey brown fur in the middle and other times less. He began to correlate the amount of brown fur in the middle to how mild or severe the coming winter would be. The more brown, the milder, the less brown the more severe… 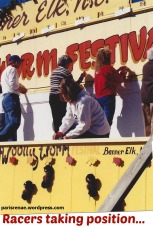 In the 1970s the townsfolk decided to take the scientific research a bit further as sometimes there were worms with both a lot and a little brown fur in a given season. So they developed the Wooly Worm races. The worm who wins the final race predicts the coming winter.

Here’s how it works – find your worm (or buy one if you must), give him a great racing name, enter the next race. When your race time arrives proceed to the stage where the race track of vertical lines of string line the billboard at the back of the stage. When the bell sounds place your worm at the beginning of the string and do whatever you think will spur your worm on to victory. (I blew warm air on mine and told him I had lots of juicy leaves – hey, it worked!)

It’s a blast…Try it, you’ll be hooked (oops don’t say that word in front of your worm…)