Ever dream of finding a bag of money or discovering you were left a vast inheritance by a long, lost relative? We live in a crazy world where, by all appearances, money solves all one’s woes. The quest for more doesn’t seem to have a limit.

I remember in my twenties thinking if we could just make x amount, then we would be set. Then we made x amount and it seemed like it wasn’t enough. Hard to admit but apparently not uncommon. Rockefeller was, at one point, the world’s richest man, first ever billionaire in America. When a reporter asked him ‘How much money is enough?’ he responded ‘Just a little bit more’.

“By wisdom a house is built, and through knowledge its rooms are filled with rare and beautiful treasures.’ (Proverbs 24:4 NIV)

Hmm, rare and beautiful treasures. Wisdom and knowledge the keys to a treasure filled house. I have no idea if Rockefeller or any of the world’s billionaires are Christians. But I see many a ‘rich’ person commit suicide, lose their families, lose themselves in drugs. According to what the world would have us believe they have everything anyone could want, and if they don’t they can get it. Then why so much agony?

“Don’t store up treasures here on earth, where moths eat them and rust destroys them, and where thieves break in and steal. Store your treasures in heaven…Wherever your treasure is, there the desires of your heart will be also.” (Matthew 6:19-21 NLT)

Desires of our heart – just a little bit more of worldly wealth, or a little bit more of heavenly wealth? I’m right there with everyone else – roof over my head, nice car, full frig — but I want my heart to be His. To not have a tight fist on mine, mine, mine but an open hand that says thank You for the blessings – and to live like I believe it.

So define rich: “He will be the sure foundation for your times, a rich store of salvation and wisdom and knowledge; the fear of the Lord is the key to this treasure.” (Isaiah 33:6 NIV) Not a key we have to hide for fear a thief will break in and steal, not a treasure that the market ups and downs can destroy – a rich treasure that the more we share it, the more we have. Very rich indeed. 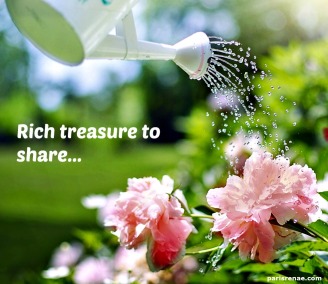